Overview
The first Club was founded in 1932 in Paris by travel managers, following an educational tour of Scandinavia. The idea of international goodwill and friendship grew and in 1934, the “Association Internationale des Skål Clubs” was formed with Florimond Volckaert as its first President, who is considered the “Father of Skål”. Skål International today has 17000 members in 400 Clubs throughout 80 nations. Most activities occur at local level, moving up through National Committees, under the umbrella of Skål International, headquartered at the General Secretariat in Torremolinos, Spain. There are 3 clubs in Tokyo, Nagoya, and Osaka, including approximately 130 club members in Japan.

Overview
Skål International cares about young professionals and students in tourism. In 1999, Young Skål was set up with the aim of creating a greater awareness of Skål International by those young people studying for or training in the various sectors of the travel and tourism industry, enabling them to join Skål.

Many Clubs provide scholarships for students in tourism. Young people are bringing to Skål their innovative power and they will benefit from the experience of the active members who may become prospective employers. In the hard competitive world, as Skål embraces all sectors of the tourism industry, it can act as an oasis free of competition, where they can find protection and support and they might even meet their mentors.

The Objectives of Young Skål

Clubs may transfer Young Skål members who qualify to Active membership at any time, once eligibility has been established. Young Skål members may attend Skål World Congresses availing themselves of possible special discounts at the discretion of the host Club.

Young Skål members should also be encouraged to use the “Member Get Member” approach to increase membership in their Club.

Young Skål Club Japan originally established under the Japan Hotel School, the largest hotel institute in Japan, with its over 1,000 students. This is because to provide its students with wider perspectives, a variety of educational experience such as lectures, meeting or seminar related to hospitality field, and opportunities to handle the language skills on their own, or chance to observe the real world while in school department. The Young Skål Club Japan was thus organized only by the students in the Japan Hotel School.

The school absolutely seek for the possibility of inviting the participation of the industrial leaders to regular meetings and holing intercommunication with Young Skål Clubs in foreign countries.

The number of members

※It is estimated that 36 members will be approximately added to the YSCJ in May 2020.
It is subject to an occasional change on number of students registered on list due to withdrawal or dropout from The JHS.

Award was entitled to YSCJ. 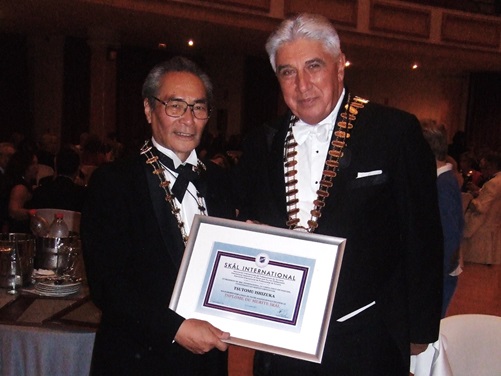 YSCJ was invited into Guam. 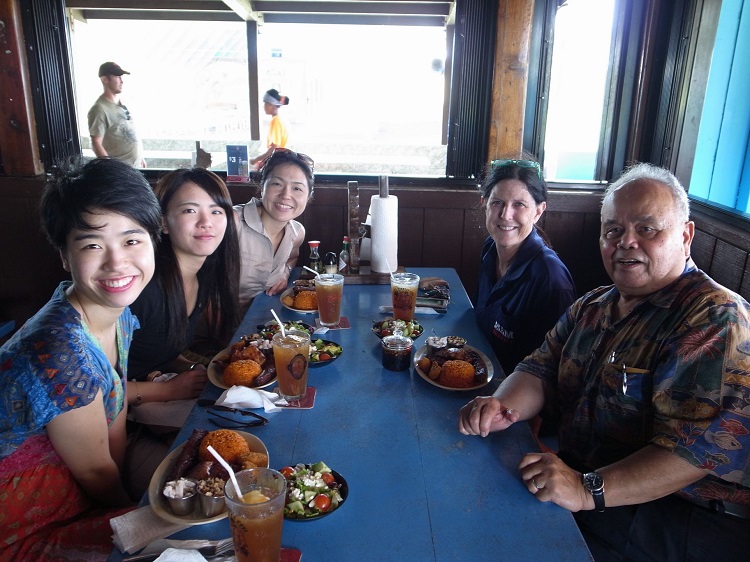 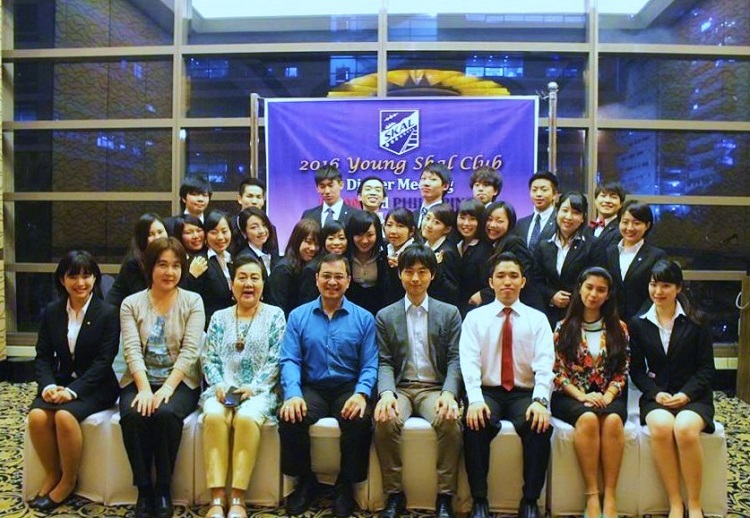 A ceremony was undertaken to celebrate new members.

The yearly Award was given to the YSCJ at Skål Asian Congress 2016 Singapore. 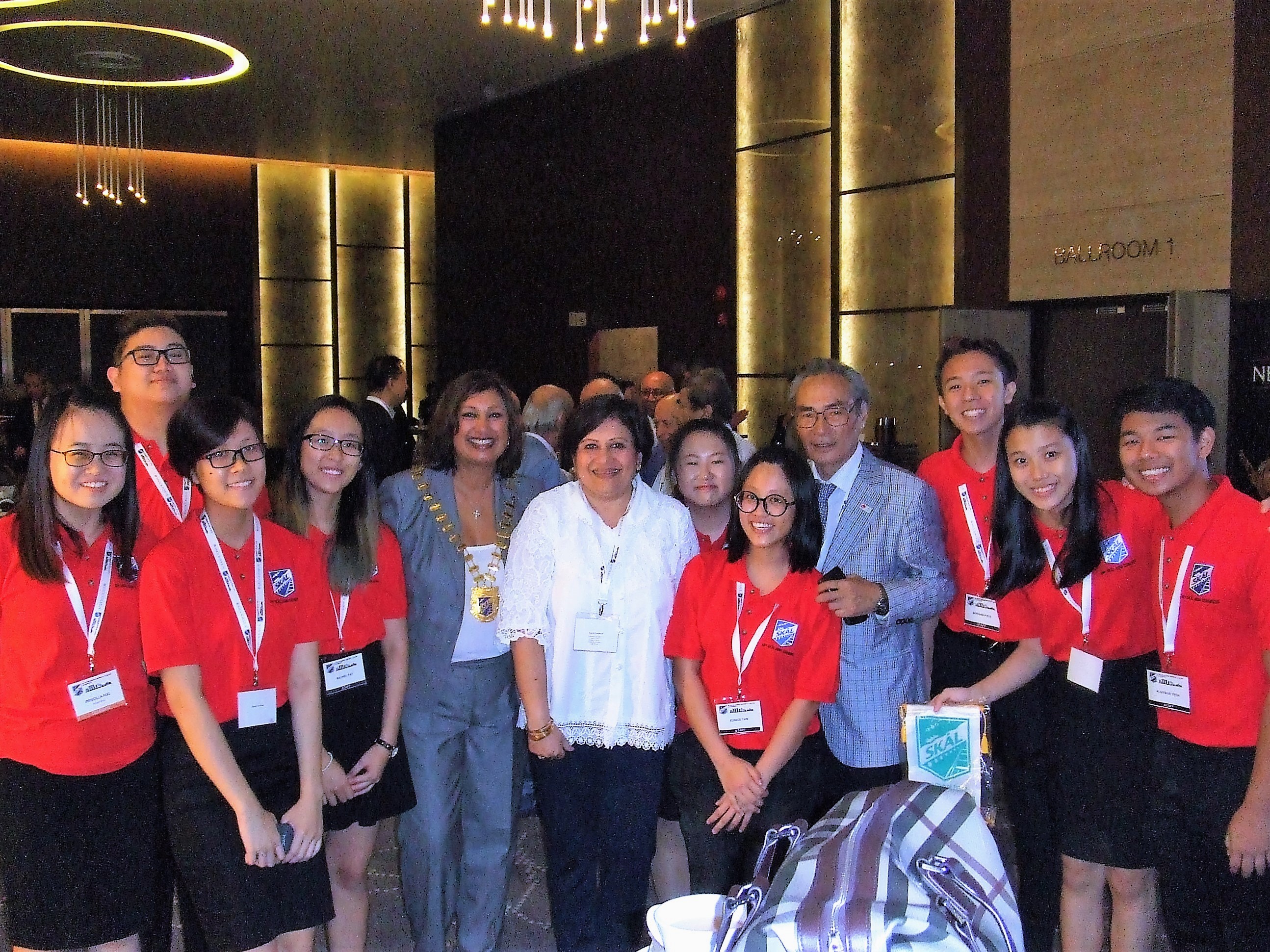 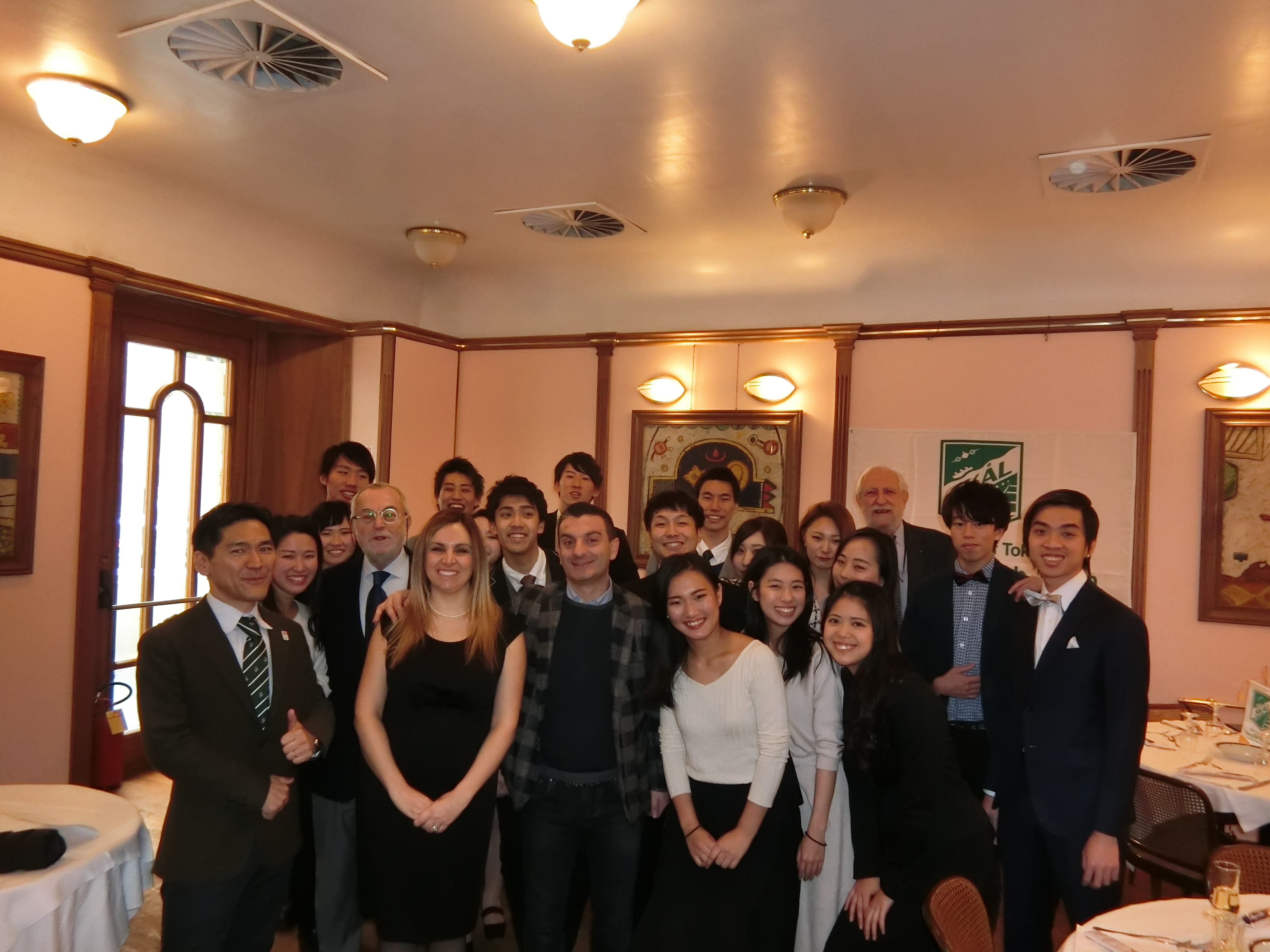 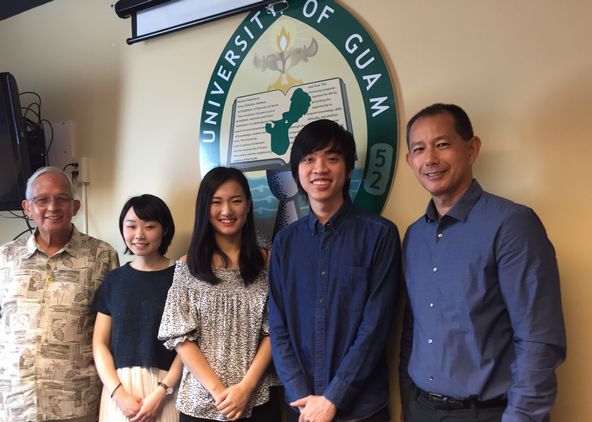 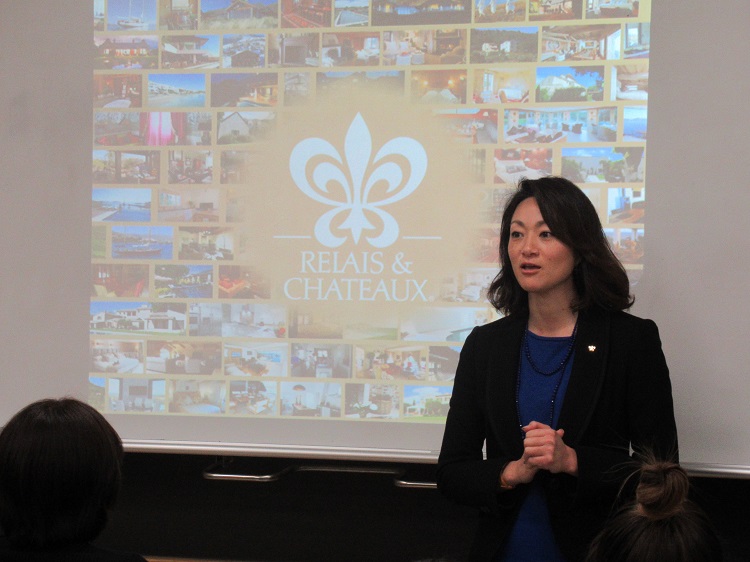 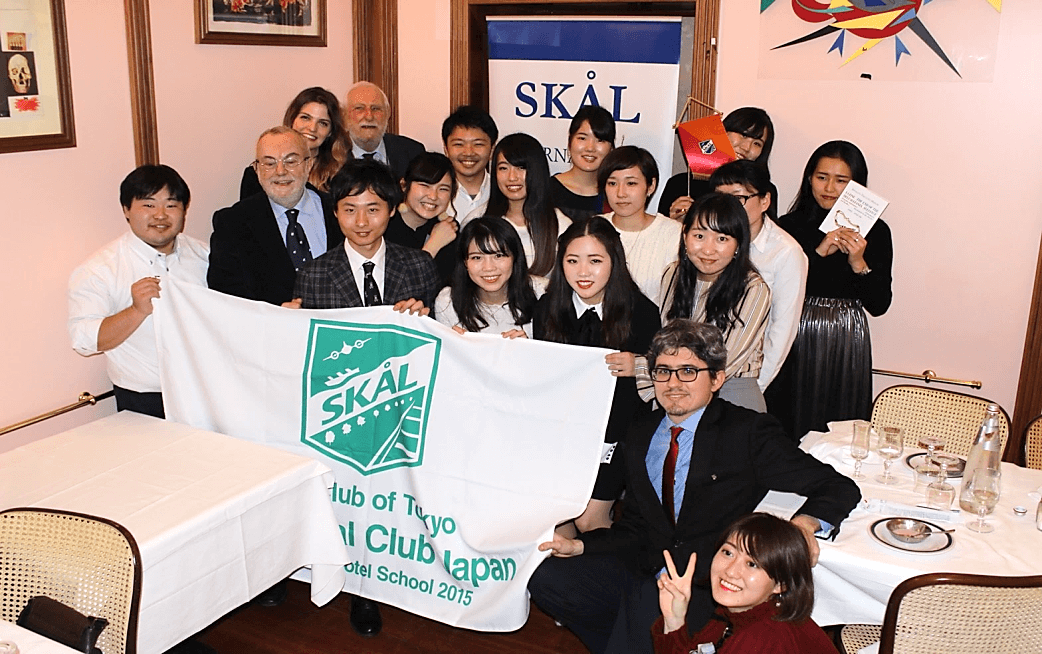 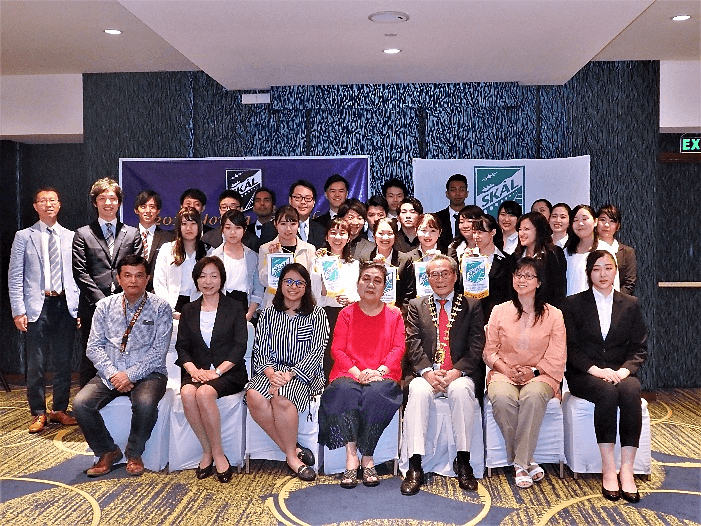 Guest speech was thrown to YSCJ from Embassy Chancellor from Republic of Zambia.

Mr. Victor Mumba inspired the YSCJ with his speech related to the tourism principle and practice in Zambia. 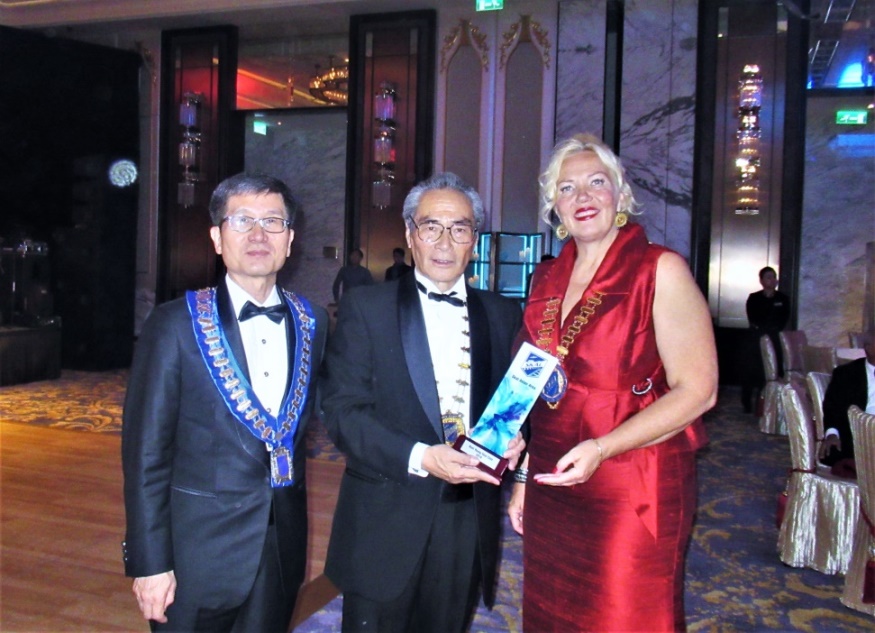 34 YSCJ had a cross-cultural exchange with Ms. Patria Chiong, Past President & International Councilor for Skål Philippines, as an annual event. Sincere understanding made among them regarding international affairs especially in Asia. The third interactive meeting was held in Rome between YSCJ & Skal Rome. Indication was potentially made as of its title “Nothing is impossible” for the youth carrer” Mr. Michael Kasch, GM, The Kahara Hotel & Resort Yokohama, 28YS 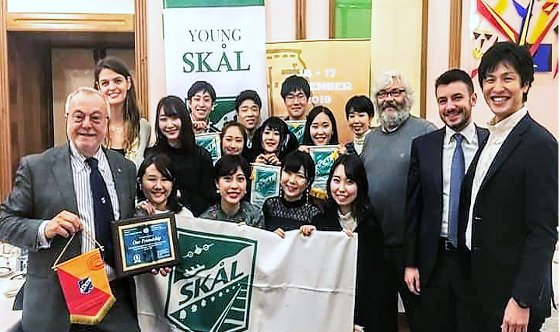 Indication was potentially made as of its title “Tourism of Lanka” for YSCJ members. Ms. Shamali, De Vaz, Managing Director of SILVERLINE TOURS PVT. We organized Young Skål Club Japan in 2015 with 78 students in our English course, whose classes are mainly taught by English-speaking teachers, in order that they have more chances to interact with top members in the hospitality and tourism industry. This is one of our educational trials to foster our students’ global-understanding.

Skål International is the world’s largest tourism organization of professional leaders of the tourism and hospitality industry, having 17,000 members in 400 Clubs throughout 80 nations. The Young Skål was set up by Skal International in 1999 as a new membership category to inspire young people for the industry, enabling them to join Skal in the future.

Since the inauguration of the club, the young members have been participating in such activities and events as intercultural session with the Skal clubs of Manila, Guam, Melbourne and Rome.

The government of Japan have raised its goal for annual inbound tourists by 2020 to 40 million and aimed at her becoming a tourism-driven country. In concord with this movement, we have been cultivating our students in attempt to generate human resources with internationally-minded eyesight and strong hospitality spirits. We expect your participation in our new approach to globalization. 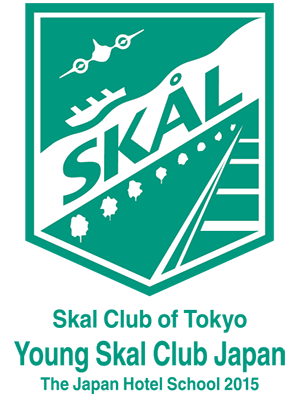 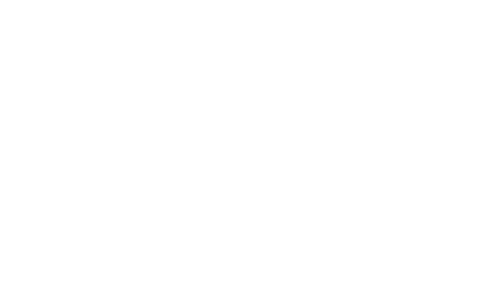